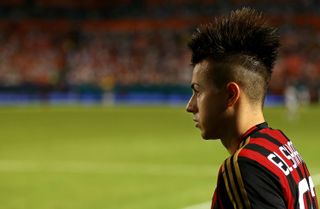 It is likely that both clubs would have hoped for an easier draw as they bid for a place in the group stages, but fate has decreed that one heavyweight is set for an early exit from Europe's premier cup competition.

PSV can at least take comfort from the fact that they come into the first leg in fine form, having won all three of their Eredivisie fixtures thus far to take their place at the top of the Dutch top flight.

Milan's domestic season has yet to begin, however, so they are somewhat short of competitive match practice ahead of the trip to the Philips Stadion.

The two teams have previously met on six occasions in the Champions League, having been drawn together in the group stages three times. Milan have won three of those encounters, two have ended in victories for PSV while the teams have also shared a 0-0 draw.

The last clash between the pair, which came in November 2005, ended in a 1-0 victory to PSV that came courtesy of an early strike from Jefferson Farfan.

The Dutch club have failed to make the mark on Europe in the ensuing years, though, and suffered a disappointing exit from the group stages of the UEFA Europa League last season.

Meanwhile, Milan, who lifted their seventh Champions League trophy in 2006-07, were knocked out of the competition at the last-16 stage by Barcelona last term.