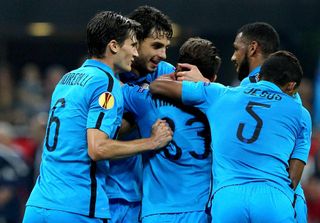 Walter Mazzarri's team had their unbeaten start to the campaign blown apart by a shock 4-1 home defeat to Cagliari on Sunday and a much-changed XI were second-best early on against the Azerbaijani champions.

However, Danilo D'Ambrosio, who scored the only goal when Inter won at Dnipro in their group opener, settled San Siro nerves with an 18th-minute strike.

Brazilian striker Reynaldo carried the main threat for Qarabag but was ultimately unable to return fire in a game of few chances, which Mauro Icardi settled five minutes from time with Inter's second goal.

Former Manchester United defender Nemanja Vidic dropped to the bench after a poor showing against Cagliari as Mazzarri made seven changes to his starting line-up, including a first appearance of the season for goalkeeper Juan Pablo Carrizo.

Qarabag coach Gurban Gurbanov made three alterations to the side that drew 0-0 with Saint-Etienne in the group opener, with Admir Teli, Namiq Yusifov and Ilgar Gurbanov the men to come in.

Gurbanov hooked a ninth-minute corner wide during a confident start from the visitors, who stroked passes around with aplomb during the early stages.

Reynaldo should have done better from a 14th-minute opening but he failed to get a shot away quickly and countryman Juan Jesus bailed out some sloppy defensive work by getting a block in.

It was therefore against the run of play when Qarabag made a mess of clearing D'Ambrosio's left-wing cross and the same player rifled home the loose ball with the aid of a deflection and the underside of the crossbar.

Andrea Ranocchia and Hernanes both went close from Fredy Guarin crosses as Inter started to find their rhythm.

Qarabag were fortunate not to fall further behind when goalkeeper Ibrahim Sehic fumbled D'Ambrosio's low 42nd-minute centre in a crowded penalty area, before the lively Reynaldo stormed forward past Juan to stab agonisingly past the far post.

Sehic was at full stretch to push over a rasping 30-yard drive from Icardi in the 57th minute, punctuating a low-key opening to the second period.

Hernanes landed awkwardly and left the field on a stretcher with 19 minutes to play, causing concern for Mazzarri that Qarabag were unable to match in the Inter penalty area, despite Gurbanov retaining laudable ambition by sending on attacking reinforcements in the form of Vuqar Nadirov and Javid Tagiyev.

Icardi shot wastefully wide in the 82nd minute but made amends by galloping onto a wonderful floated pass by Pablo Daniel Osvaldo a few moments later and drilling home impressively on the angle.

Inter boast a healthy four-point cushion in Group F, while back-to-back games against Dnipro are likely to prove pivotal to Qarabag's chances.