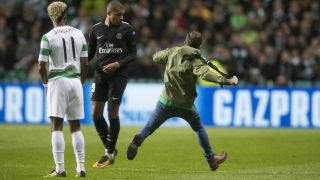 PSG had just gone 3-0 up at Celtic Park thanks to an Edinson Cavani penalty when the individual ran on to the turf and headed for the 18-year-old forward.

The man, who was wearing a Celtic scarf and jersey, appeared to aim a kick at Mbappe as he stood in the centre circle, but he missed the teenager and was swiftly dragged away by security and arrested.

UEFA confirmed on Wednesday that disciplinary proceedings had been opened against Celtic in light of the incident, citing "field invasion" as the offence.

He said: "That reaction [jeers from the Celtic fans] said it all really. It's disappointing for any ground, any club, a supporter getting on to the pitch like that.

"It was bitterly disappointing and I'm sure the club will deal with that. Whoever that person was it shouldn't be anything we see, especially on a football field.

"I think the stewards dealt with it at the time and I'm sure the club will deal with it. The crowd and their reaction told you everything you needed to know."

Celtic have been at the centre of no fewer than 12 disciplinary offences in the last six years, with their most recent one coming in July when a section of the club's supported unfurled an "illicit banner" in a Champions League qualifier with Northern Ireland's Linfield.