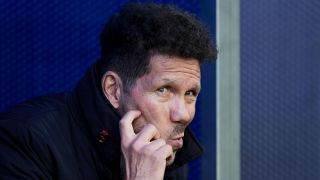 Atletico Madrid head coach Diego Simeone's appeal against a touchline ban for the Europa League final against Marseille has been dismissed by UEFA.

Simeone was sent off by referee Clement Turpin during the first leg of Atletico's semi-final against Arsenal, having remonstrated with the official following Sime Vrsaljko's 10th-minute red card in the 1-1 draw at Emirates Stadium, and received a four-match ban.

The 48-year-old watched the 1-0 second-leg victory from the Wanda Metropolitano stands last week, which served as the first match of his sanction.

Simeone will have to take in the final against Marseille at Groupama Stadium from a similar view after failing to get the suspension overturned.

"The UEFA Appeals Body met on May 11 following an appeal lodged by Atletico Madrid and Diego Simeone against the decision announced by the UEFA Control, Ethics and Disciplinary Body (CEDB) on May 4 which ordered Diego Simeone to be suspended for four (4) matches," a statement from European football's governing body read.

"The appeal lodged by Atletico Madrid and Diego Simeone has been dismissed and the UEFA CEDB's decision of May 4 is confirmed.

"Given that Simeone did not participate in the match between Atletico Madrid and Arsenal, played on May 3, 2018, the official still has to serve a suspension of three (3) UEFA competition matches for which he would be otherwise eligible."

A report from Spanish newspaper El Pais claimed Atletico intend to ask the Court of Arbitration for Sport for precautionary measures that would allow Simeone to be on the sidelines in Lyon.