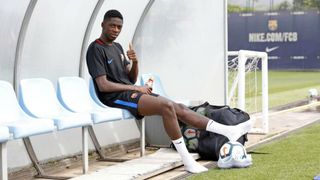 Samuel Umtiti is excited by the prospect of playing alongside Ousmane Dembele at Barcelona.

Dembele completed a €105million switch from Borussia Dortmund on Monday to replace Neymar, who left to join Paris Saint-Germain in a world-record €222m deal earlier in August.

Umtiti - a France team-mate of Dembele's - is thrilled by the signing of the 20-year-old, believing he has the profile to fill Neymar's boots.

"I knew Barcelona were very interested in [Dembele]," he told a news conference while on international duty. "I often talked with him on phone because he's my friend.

"I'm very glad he's joining us. He is the type of player that we have missed since Neymar left.

"He's a very carefree person - in relation to everything that happens, in relation to the talent he has. It's one of his strengths and I hope he will help us to win titles.

"I cannot wait to see him. He is a player who will demonstrate his talent in our team, in our league.

"He has his head on his shoulders but I will be behind him to help him to do things in the right way."

Umtiti is keen for Barca to look forward following Neymar's exit, stating the Brazilian must have had his reasons to move to France.

"If a player feels like going elsewhere, it's up to us to accept it and focus on our team goals," he said.

"[Neymar] told us [he was leaving] the day he left to sign in Paris. Leaving Barcelona is not weird, but it's a great club. He had his reasons."