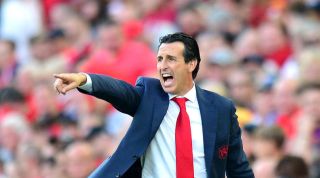 Unai Emery has revealed that Alex Ferguson once mocked him for his regular presence in the Europa League.

The Arsenal manager won Europe's secondary club competition for three straight seasons during his time in charge of Sevilla between 2013 and 2016.

The La Liga side failed to make an impact in the Champions League under Emery, however, and he has yet to manage Arsenal in the continent's premier tournament.

The Gunners reached the Europa League final last term, only to lose 4-1 to domestic rivals Chelsea in Baku.

And Emery has revealed that Ferguson, who won the Champions League twice at Manchester United, teased him for his regular participation in the Europa League.

"One day we were in Nyon for the coaches meeting and I was defending a lot the Europa League, and he – Ferguson – asked me, 'But really Unai, do you not prefer to win the Champions League?'" Emery told Soccer AM.

"Yes of course! He didn’t need to say it! But at that moment I can be happy and I can defend the Europa League because also I think the UEFA people improve a lot this competition. But really, really the first is the Champions League – OK."

Arsenal have been drawn alongside Eintracht Frankfurt, Standard Liege and Vitoria de Guimaraes in Group F of this season's Europa League.