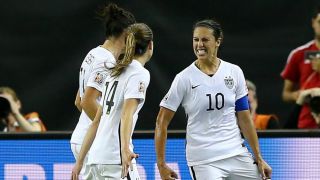 United States' clinical finishing from the spot was the difference as they beat Germany 2-0 to reach the Women's World Cup final.

Where Germany's Celia Sasic failed, Carli Lloyd succeeded and helped the two-time winners into the final for a second successive World Cup.

Sasic missed a penalty just past the hour-mark, before Lloyd converted one of her own and then added an assist for Kelley O'Hara at the Olympic Stadium in Montreal.

USA will face either England or Japan for the title in Vancouver on Sunday.

The tournament favourites have not conceded a goal in 495 minutes.

Germany blew a golden opportunity in the 61st minute when Julie Johnston pulled down Alexandra Popp, but Sasic's penalty went left of the target after US goalkeeper Hope Solo dived to the right.

It was the first time in Women's World Cup history that Germany missed a penalty.

Alex Morgan was hit just outside the box by Annike Krahn in the 67th minute, but a spot-kick was awarded.

Morgan fell into the box and writhed in pain after taking a knee to her thigh.

Lloyd's penalty was more convincing to give Jill Ellis' team the lead.

Lloyd joined Abby Wambach and Michelle Akers as the only American women to score in three straight World Cup matches.

O'Hara sealed the Americans' progression, coming on in the 75th minute and scoring nine minutes later.

The Germans nearly broke the deadlock early, but Melanie Leupolz's attempt in the third minute sailed over the crossbar.

The teams exchanged shots a few minutes later, but both Solo and Germany goalkeeper Nadine Angerer kept the match scoreless.

Angerer stopped a Megan Rapinoe shot in the ninth minute and kicked away a Morgan attempt three minutes later.

The match was stopped in the 28th minute after USA's Morgan Brian and Popp both went up for a 50-50 ball.

Their heads collided and Popp had blood seeping through her blonde hair.

The match was delayed for several minutes and both players left the field briefly before returning.

USA had several chances late in the first half, but the German defence suffocated their strikers to stifle each scoring opportunity.

While the Americans were the aggressors and possessed the ball for much of the half, between the Germany defence and off-target USA shots, the match entered half-time scoreless.

Germany turned up the offensive pressure in the second half, but had the same fate as the Americans with shots that either went wide or high of the goal.

Lloyd helped USA ice the match when she sent a pass in from the left side to O'Hara, who flicked it into an empty net in the 84th minute.