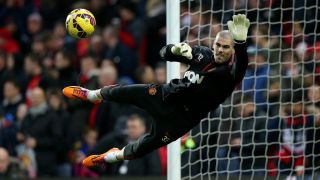 The former Barcelona number one tore his anterior cruciate ligament in March 2014, and a move to Monaco collapsed as he began his rehabilitation.

Valdes subsequently trained with United and joined the club as David de Gea's backup in January.

"This is the way now," he told the club's official website. "When you don't play in the first team here in England, it's usually better to play in the reserves.

"It's not something we do in Spain but you must accept it and focus on your performance because it is good for your game rhythm.

"I'm very happy with my knee and playing with my new team-mates. It's a good feeling to be on the pitch again playing football. It is most important for me after my injury.

"I am very happy for this option in my career after my injury. I always say it's great for my career to be a part of this club and part of this team and, maybe, I hope to win another important trophy here too."