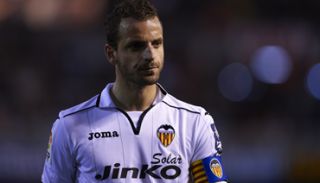 Valencia's 1-0 victory at home to Granada lifted them above Sociedad into fourth, two points clear of Basque club Sociedad who drew 3-3 with second-placed Real Madrid in San Sebastian.

Champions Barca, missing the injured Lionel Messi, coasted to a 2-0 win at city rivals Espanyol that put them on 97 points and victory next Saturday at home to Malaga would mean they equal Real Madrid's record total of 100 set last term.

Real's draw at Sociedad means Barca are now 15 points ahead of their arch rivals, three more than the biggest winning margin in La Liga history set by Barca in the 2005/06 season.

Valencia's bid to qualify for the Champions League foundered when they lost 4-2 at Sociedad at the end of last month but four straight victories have put them back in pole position to secure fourth spot and a place in the qualifying round of Europe's elite club competition.

Their final match is at ninth-placed Sevilla next Saturday, who have nothing to play for, while Sociedad are at relegation-threatened Deportivo La Coruna.

"It was very important for us to get ahead of Sociedad as it means we have our fate in our own hands," Valencia coach Ernesto Valverde told a news conference.

"The Sevilla match is going to be tough as they are very strong at home," he added.

After the Espanyol players applauded their Barca opponents onto the pitch before kick-off in recognition of their fourth La Liga title in five years, Alexis Sanchez fired the champions ahead in the 14th minute.

With several key players watching from the bench, Barca comfortably controlled the game and Cesc Fabregas hit the post before Pedro exchanged passes with fellow substitute Xavi to make it 2-0 four minutes from time.

At the other end of the table, a 3-1 defeat for 17th-placed Depor at Malaga means that all three teams in the relegation places - Celta Vigo, Real Zaragoza and Real Mallorca - still have a chance of avoiding the drop.

Deportivo, who host Sociedad next weekend, have 35 points.

In other matches on Sunday, Athletic Bilbao played their last La Liga game at their storied San Mames stadium before they move to a new facility close by, losing 1-0 to Levante.

In Malaga, coach Manuel Pellegrini, who said this week he was leaving at the end of the season and is expected to replace the sacked Roberto Mancini at Manchester City, was given a warm send-off by the home fans at the Rosaleda.