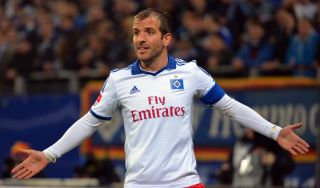 The Dutchman has missed Hamburg's last two matches with a thigh injury, but is in line for a return to help ease the side's relegation fears after training in midweek.

Hamburg could this weekend be condemned to a bottom-three finish - with their record of never having been relegated from the German top flight in danger.

However, coach Mirko Slomka is hopeful the skipper's return could help offer some attacking threat against a Bayern side knocked out of the UEFA Champions League convincingly by Real Madrid on Tuesday.

"Recently, we were not effective enough. The goalscoring tally in recent games (is something) we have to change," Slomka is quoted as saying by the Hamburger Morgenpost.

"I am pleased that he will return. We are much too weak going forward."

Hamburg must win against Bayern and Mainz to have any chance of avoiding a relegation play-off, while they could still slip into the automatic drop zone depending on how Nuremberg and Eintracht Braunschweig beneath them fare.