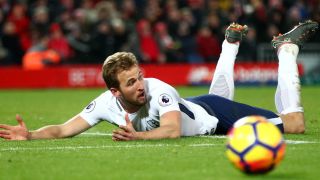 In a remarkable finale at Anfield, the scores were level at 1-1 with six minutes to go when Kane went down under a challenge from Loris Karius, who subsequently saved the striker's weak spot-kick.

Liverpool thought they had snatched it through Mohamed Salah's sensational solo effort in stoppage time, but there was one final twist as Van Dijk was penalised after being adjudged to have felled Lamela inside the box.

Referee Jon Moss initially waved play-on but, following consultations with his assistant, awarded the kick and this time Kane made no mistake to snatch a dramatic point with his 100th Premier League goal.

First the fantastic leading goal by then the unlucky penalty call in the last minute. This time unfortunate - next time more lucky. Massive support by the fans February 4, 2018

"I think it [the first penalty] is a dive," Van Dijk said. "You see him [Kane] diving clearly and no-one is talking about that. But I think it is a dive.

"There is a lot of discussion about whether it is offside, yes or no, but I think it was offside as well. I thought it was a dive.

"You could just see him making that dive. That is my opinion and the referee thought it was no offside and no dive and he gave a pen.

"There were loads of things going on. I think the first goal was offside and then [for the second one] it is a decision the ref already made and the ref is closer than the linesman. Unlucky I think. I thought it was a bit harsh.

"I see him [Lamela] coming in the end and I try and hold my leg in, he just pulled his body in front of the ball and he goes down.

"The ref said play on and I was very disappointed that the linesman said otherwise.

"First of all it was offside and secondly he just put his body in front of me. I don't think that is a penalty and the same with the first one. That is also clearly not a penalty."