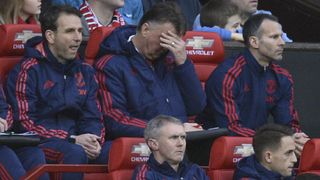 Louis van Gaal believes the furious reaction that greeted the final whistle in the 1-0 Premier League loss to Southampton on Saturday marked a low point in his relationship with Manchester United's fans.

Debutant Charlie Austin came off the bench at Old Trafford to head an 87th-minute winner, illuminating a forgettable encounter in which each side struggled for fluency and failed to create clear-cut chances.

Boos greeted the end of the first half and after 90 minutes the ire reached new levels, with United slipping five points behind fourth-place Tottenham.

Performances at home have rarely been rapturously received this season, but Van Gaal told a post-match press conference that was the worst reception he has received so far.

"Yes, it was very clear I think," he said. "I can imagine [why] also, because I have seen also a poor match.

"I cannot change that feeling, I can only work hard with my players to improve our game and that is what I'm doing.

"Of course I'm disappointed but I have to think and already I put the question [to the players] 'how can we change this?', because we have to change this and that's my job."

"The injury of Darmian came and that changed our play, I think, because that was not a nice view to see for my players.

"Still I wanted to win this game because when you can see a poor game without creating chances like that, you can win this game.

"But every change I have made today was also, in advance I knew, that when we have set-play we have a problem.

"When you change Fellaini and Darmian is going out you [lose] two headers and we don't have a tall team.

"Of course with the changes I realised that but I hoped for more because I wanted to win this game."