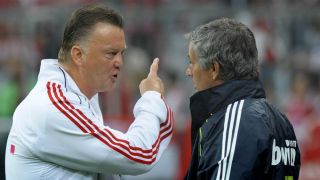 Louis van Gaal accepts criticism is part and parcel of managing Manchester United, but he is unhappy with "nonsense" stories from the media.

Van Gaal's job security has been the subject of much media speculation again this week, despite United's impressive 3-0 win over Stoke City, with reports suggesting United have been in contact with former Chelsea manager Jose Mourinho.

But while the Dutchman, who is preparing United for a crunch game against Chelsea on Sunday, is not bothered by criticism, he does not feel there is any substance to stories linking Mourinho with his job.

"The last two months have been very difficult for my wife, my kids, my grandchildren and my friends to cope with," the United manager said.

"For me too, but I can cope. In the Netherlands they know I am too arrogant to doubt myself, but I also know that such a nonsense is being created about me.

"I do not believe that there is already a relationship between Jose Mourinho and Manchester United."

Van Gaal said it was also untrue that he had hired security for his wife in the face of increasing dissent from United's support, as had been reported in UK media.

"It is logical when you have lost four matches in a row, people are bound to be doubting," he said.

"I criticise the media for inventing stories.

"I never hired security. Never ever. And I am walking on the streets without security and all the people I meet are very positive."

Despite his side facing a real battle to qualify for next season's Champions League, Van Gaal insists he remains on the right track with United, insisting he had to make some tough calls when he arrived at the club.

"If you look at the selection now to the one I took over there is no comparison," he said.

"I had to move some out, and people said I was wrong, but in the last 18 months players like Rio Ferdinand and Nemanja Vidic have retired. They are not playing football anymore."