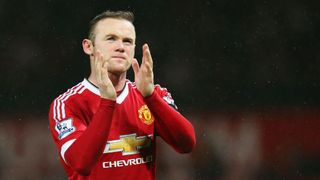 Louis van Gaal paid tribute to Wayne Rooney after the Manchester United captain further etched his name into the history books on both a club and national level.

Rooney scored a wonderful winner in a 2-1 victory over Swansea City on Saturday to move outright second on the all-time list of United goalscorers, as well as in the Premier League's chart of top marksmen.

The England skipper's 238th United goal sent him one clear of Denis Law and 11 behind the legendary Bobby Charlton, while he also moved ahead of another Old Trafford favourite, Andrew Cole, with his 188th Premier League strike.

Alan Shearer holds a healthy 72-goal cushion at the top of that particular list.

Asked for his view on Rooney's United achievement, Van Gaal said: "It's amazing. And that at the age of 30.

"You have to say that now we are playing much more matches I think, but still it is a fantastic achievement.

"But for me it's more important that he scores now and he scored today.

"I hope that is a fantastic starting point for the team but also for him."

Rooney was recently dropped from Van Gaal's starting XI having not scored since October, but the Dutchman does not believe that omission can take any credit for Rooney's return to form after his goal gave United a first win in nine matches.

"I said to him it is your second match in a row where you are playing very good and you score a goal," Van Gaal added. "That has nothing to do with leaving him out.

"It is also that he has played every game and sometimes he needs rest."