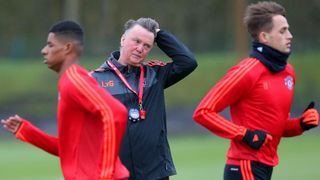 Louis van Gaal still believes his philosophy is working at Old Trafford and insists Manchester United remain in the hunt for silverware this season.

It will take a massive effort for United to make it through to the Europa League quarter-finals after losing the first leg of their last-16 tie against Liverpool 2-0 at Anfield on Thursday, while the club is 13 points off Premier League leaders Leicester City.

That means United's only real chance of silverware comes in the FA Cup, in which Van Gaal's men take on West Ham in the quarters on Sunday.

But despite mixed results of late, the Dutchman has retained faith in his system and players, despite using over 30 players this season due to injuries.

"I think it is working, because you have to see how we have to work and under which circumstances," said Van Gaal.

"When you don't have too many players and you have to play in three competitions, it is very difficult to play.

"The style is also working. It is not giving the best results. It is not good enough when you think that you have to be champion or win the Europa League or the FA Cup.

"It is still possible, but when you see this [Liverpool] game, you can say that it is not working. But when you analyse what we have done this season and last season, you cannot say that."

Van Gaal said he did not want to hide behind injuries as an excuse, but said having dealt with long-term absentees like captain Wayne Rooney as well as Bastian Schweinsteiger, Luke Shaw, Antonio Valencia and Ashley Young had played a role in United's mixed fortunes.

"Every manager in the Premier League is rotating and it is necessary, but I have to rotate because of injuries or tired players. That's difficult, that is not so easy," he said.

"That is also cheap for me to say that. And I don't want to hide behind the injuries or something like that. We are still in three competitions. So we can fight for a lot.

"And it is possible that we are going out. And then it is again a very difficult situation for everybody. But still we have the chance to win something and you have to believe in that."