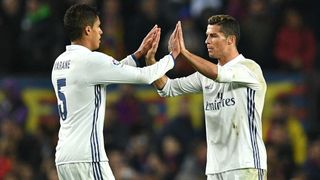 Raphael Varane has lauded history-maker Cristiano Ronaldo and would love to see Kylian Mbappe playing alongside him at Real Madrid.

Ronaldo has enjoyed yet another stellar campaign, scoring 25 top-flight goals to help Madrid to their first LaLiga title since 2012, while surpassing 100 Champions League strikes en route to the final against Juventus.

While Ronaldo's legend is well established, another player has emerged on the world stage this year in the shape of Monaco's Mbappe, who is attracting interest from Europe's biggest clubs – including Varane's Madrid.

"Mbappe is a very good youngster with a huge potential," the France defender told Telefoot. "It would be a pleasure to see him here. In addition to that he is French, so he would be welcome. We will surely get the chance to discuss this."

Portugal star Ronaldo is vying with legendary Juve goalkeeper Gianluigi Buffon for the Ballon d'Or and Varane was effusive in his praise for both players.

He said: "They are immense. They made history. Their duel in the next game will have an influence on the Ballon d'Or. We're not acknowledging enough how Ronaldo is making football history right now. I'm lucky to play with him."

Zinedine Zidane's men face the Serie A champions in Cardiff next Saturday as they seek to become the first side to retain the Champions League title.