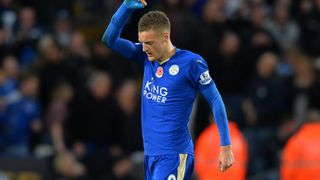 Leicester City forward Jamie Vardy would still be a success at a bigger club, according to Chelsea manager Jose Mourinho.

Record-breaker Vardy has dominated the Premier League this season, scoring 14 goals – including netting in 11 consecutive games.

Mourinho said the 28-year-old England international could succeed anywhere, although his direct style would be tested.

"He is top scorer and it is normal that big clubs want him," he said ahead of Chelsea's trip to King Power Stadium on Monday.

"Obviously in the big teams sometimes we face very low blocks where technical players to play in the box are very much needed, but I think a fast player with objective and being direct can have success everywhere."

Mourinho said he expected Vardy's record, which he earned with a goal against Manchester United in late November, to last.

"I don't think next season someone will come and beat his record, it is not an easy one to do," the Portuguese tactician said.