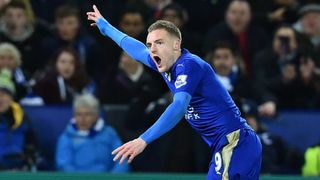 Jamie Vardy's decision to remain with champions Leicester City sent a message to the rest of the Premier League according to Claudio Ranieri, who understands why N'Golo Kante opted to move to Chelsea.

Vardy scored 24 goals in 36 appearances to fire Leicester to glory last season and collect the Football Writers' Association's Footballer of the Year award.

The 29-year-old England striker was the subject of sustained interest from Arsenal, who met his release clause at Leicester, but he opted to sign an extended contract at the King Power Stadium.

Ranieri was understandably delighted and compared Vardy's actions to Luigi Riva – the great Italian forward who spent the bulk of his career with Cagliari, helping the unfashionable club to their only Serie A title in 1969-70 and famously rejecting a move to Juventus.

Asked about the importance of not losing Vardy by Gazzetta dello Sport, Ranieri said: "It was huge. It gave a signal to all.

"He could have gone to Arsenal, earned more money and taken advantage of his last chance to land in a world-class club.

"He preferred instead to stay at Leicester and it seems to me a choice like Gigi Riva. Vardy should be thanked."

Ranieri accepted that France international Kante, who completed a move to Chelsea reported to be in the region of £30million on Saturday, had solid reasons for going against his pleas for squad unity.

"I hoped for them to stay and listen to all my advice: we all live the adventure of champions together, then next summer be free to make different choices,” the Italian added.

"However, I realise that the lure of a club like Chelsea cannot leave a player indifferent."