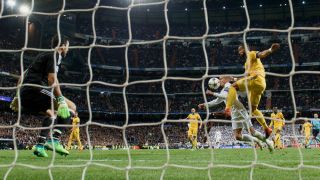 Diego Maradona said Real Madrid should not have been awarded a stoppage-time penalty against Juventus in the Champions League, though the Argentine icon insisted Lucas Vazquez threw himself over like he would have done.

With extra time looming after Juve erased Madrid's three-goal first-leg advantage by sensationally taking a 3-0 lead at the Santiago Bernabeu, Vazquez was fouled under a challenge from Medhi Benatia.

Juve captain and goalkeeper Gianluigi Buffon was sent off as he furiously protested Michael Oliver's decision, and Maradona weighed in on the penalty debate.

"It was not a penalty, no!" Maradona said when asked about the incident.

"When Ronaldo heads the ball, Lucas had to throw himself at it because he was next to Buffon, and he had Benatia coming in from behind.

"He did as I would do it too, grabbed his chance and threw himself over."

Madrid will face German champions Bayern Munich in the semi-finals of the competition.