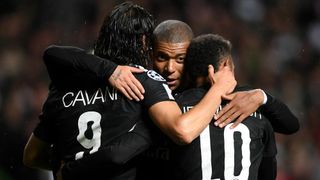 Cavani netted a brace to become PSG's leading scorer in European competition with 22, Neymar also scored and new signing Mbappe made it two goals in as many games since arriving on loan from Ligue 1 titleholders Monaco.

The trio have proved unstoppable in France and they sent a warning to their Champions League rivals as Verratti said: "They are exceptional players.

"We are lucky to have them here. There are other very important attackers on other teams, but we have to think only of ourselves.

"They can decide the match at any time."

Thank you for the amazing welcome to the legendary Celtic Park Looking forward to seeing you in Paris on November 22  September 12, 2017

Cavani has scored nine goals in all competitions – seven of those in Ligue 1, Neymar has contributed four domestically, while 18-year-old sensation Mbappe has hit the ground running since making his debut against Metz last week.

PSG skipper Silva was glowing of the trio, as well as off-season recruit and Brazilian veteran Dani Alves.

"The players who have arrived have already adapted to the team," Silva told reporters.

"Dani brings his experience, Neymar also, like Mbappe, we have demonstrated the quality of PSG.

"We are happy about tonight but the work continues. This is not a message for others, but for ourselves, to say that we are capable of a match like this."