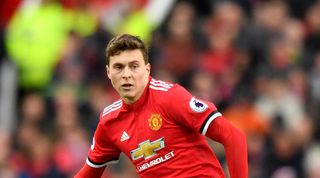 Victor Lindelof says he would like to remain at Manchester United for "years to come".

The Sweden international moved to Old Trafford in 2017 and signed a new contact in September which ties him to the club until 2024.

And Lindelof says he did not have to think twice about putting pen to paper on an extension.

“When they offered me a new contract it was very, very easy for me. I never really looked at [the contract]. I just took up the pen and signed it," he told United's official podcast.

“I’m very happy here and I want to be here for many more years to come and I know that I can become a better player here.

“I know the club can help me and I want to stay here for more years and hopefully we can win some trophies as well. That’s my main goal.

“When United wanted to sign me, I think it was in January [2017]. Things didn’t happen, but I knew they wanted me.

“I wanted to focus on my football, because I wanted to win the title and the cups and everything [with Benfica]. I’ve always been mentally strong, which I think is why I was able to carry on.

“I just carried on, kept working hard and told my agent, 'As soon as the season is at an end, you can come back to me and tell me what’s happening.'

“In those last few months of the season, we won every game in the league and the Portuguese Cup as well. It was a great end for me to win those trophies.

“After the last game, my agent called me straight away and explained the situation [with United].”

Ole Gunnar Solskjaer's side will be looking to end a three-match winless streak against Norwich on Saturday.