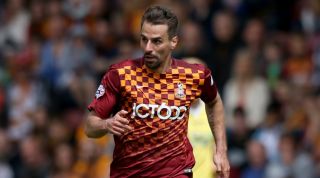 League One rivals Bradford released Filipe Morais in January, leaving the Portuguese winger without a club.

A day later, the 31-year-old journeyman – who names Hibernian, St Johnstone, Oldham and Stevenage among his former clubs – signed for Bolton to link back up with former Bantams boss Phil Parkinson.

Morais is currently re-paying the faith – he got all four assists in his side’s 4-0 win over Gillingham on Tuesday, adding to the three he racked up in Saturday's crucial 4-2 win at second-placed Fleetwood.

Morais has actually assisted nine of Bolton's last 10 goals and helped them to third place, three points clear of Bradford who are two places behind having played as many matches more.

The Portuguese has never played in the English Championship before – but he's doing his best to change that for 2017/18.

See all four of Morais' assists against Gillingham