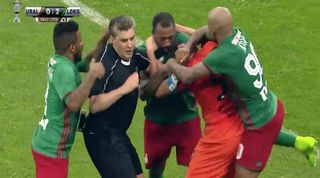 But in the 92nd minute, things got out of hand. Ural's Artem Fidler and Edgar Manucharian, and Lokomotiv's Jefferson Farfan and Ari, were all sent off for their parts in a scrap which involved both sets of teams.

Replays showed Lokomotiv's Ari leaning across in the melee to punch Fidler, who is alleged to have sparked the brawl after taking offence to comments from former Portugal international (and two-time Everton loanee) Manuel Fernandes.

The game took place at Sochi's Fisht Stadium, a venue for the 2018 World Cup in Russia. A great advert indeed.