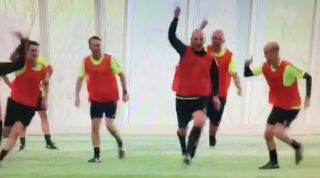 Dean was filmed slicing the ball into the back of the net during a match involving the Premier League's top matchday officials.

The footage comes from Sky Sports' documentary The Referees, Onside with Carragher & Neville which offers an inside look into the life of a top-flight middle man.

And in a rare, unforgivable act of referees being human, Dean – with colleagues Anthony Taylor and Martin Atkinson – has shown off his alternative side by running the length of the pitch in a co-ordinated celebration after scoring a scrappy goal.

Mike Dean. The man, the myth, the legend. pic.twitter.com/oJX7xvKAUS

Dean has developed a special reputation within the game for his exaggerated actions and humourous (if unintentional) antics, including when he couldn't contain his excitement for a Tottenham goal against Aston Villa last season.