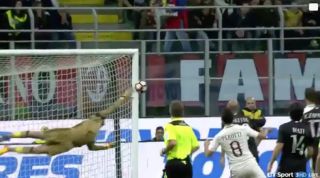 Serie A's second-placed side Roma secured a convincing 4-1 win over Milan at the San Siro on Sunday night – but it could have been even worse for the Rossoneri had Gianluigi Donnarumma not pulled off a stunning save in the first half.

Creative forward Diego Perotti unleashed a ferocious curling effort on goal which looked almost certain to hit the back of the net, but Milan's young net-minder Donnarumma – as he has so often in another impressive season – produced a fine fingertip save to push the ball onto the post.

Donnarumma is widely considered Gianluigi Buffon's heir, and is reportedly the subject of serious interest from Chelsea and Manchester United. It doesn't take too much to see why.