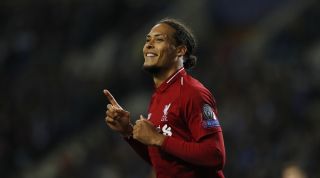 Virgil van Dijk insists that Manchester United should do themselves a favour when they face Manchester City this week.

Pep Guardiola's side are two points behind Liverpool at the top of the table, but victory at Old Trafford would put City - who have currently played a game fewer than Jurgen Klopp's men - in firm control of the title race.

Liverpool are therefore in the unfamiliar position of wanting United to win on Wednesday, but Van Dijk insists the Red Devils should go all out for the three points for their own sake.

Despite losing 4-0 to Everton on Sunday, Ole Gunnar's Solskjaer's side are just three points adrift of fourth spot as they seek Champions League qualification.

And Van Dijk believes United are not in a position to pass up the opportunity to close that gap.

"They need to do themselves a favour,” he said when asked if United could aid Liverpool's title tilt.

“We have no influence on that, but they are still playing for Champions League football and they need to get a result.”

Liverpool beat Cardiff 2-0 on Sunday to restore their two-point advantage over City heading into the final weeks of the campaign.