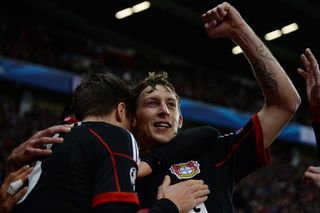 Kiessling was on hand to score either side of half-time, with Sidney Sam and Simon Rolfes also finding the net as Leverkusen cruised to an emphatic victory and moved second in Group A of the UEFA Champions League.

It was the second time this week that the 29-year old striker has managed to grab the headlines, following the controversy of his 'phantom goal' against Hoffenheim on Friday.

He told Sky after the game: "I was very happy for Stefan. The last few days have been very difficult for him and he was confronted with a lot from all angles.

"But he is a tough guy and handled the situation well. He showed a lot of character."

The victory over Shakhtar extended Leverkusen's winning run in home Champions League group stage matches to an impressive eight games and leaves them one point behind leaders Manchester United.