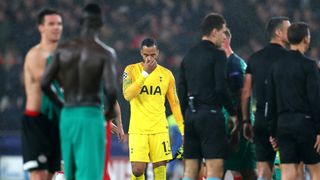 Tottenham must learn some "harsh" lessons from their turbulent Champions League campaign this season, according to Michel Vorm.

The Dutch goalkeeper was a late substitute after Hugo Lloris was sent off with Spurs leading PSV 2-1 in Group B on Wednesday.

And the 10 men could not hold on to their narrow lead away from home, with PSV captain Luuk de Jong beating Vorm in the 87th minute.

Spurs boss Mauricio Pochettino conceded his team's qualification chances are "nearly over", with a five-point gap to make up on second-placed Inter with three games remaining, one of which is away to leaders Barcelona.

Despite winning four Premier League games in a row, Spurs have failed to get to grips with the Champions League this term and Vorm said the team must be better prepared for the demands of playing in Europe.

"If you see the statistics after the game, it says it all. If we'd have won 4-1 or 5-1, it would have been deserved. And that makes it even harder, because now it feels like we lost.

"We had to kill the game but it's something you don't even have to talk about. We know that, especially in European games.

"From the bench, we thought: 'We need to score the third.' Everybody knows, everybody wants to score. But you also know that the opponent is always ready to come out on the counter-attack, especially with the way PSV were playing.

"European football is just totally different from the Premier League. We're still in a process of learning in these kind of games. It's harsh, though."