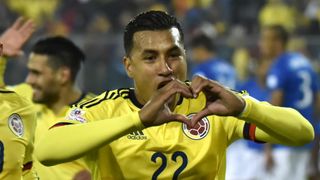 Recent Inter acquisition Jeison Murillo has vowed to fight "like a warrior" for his new club after leaving Granada for a dream opportunity.

Murillo had long been talking up his proposed move to Inter, revealing as early as February that an agreement was in place, but the Italian club only made the deal official at the beginning of July.

The Colombia international had spent the last five years in Spain, enjoying various loan spells away from Granada before eventually securing a first-team berth during the 2013-14 campaign.

A number of injuries hampered his progress last season, but that has not deterred Inter from spending a reported €8 million on the 23-year-old, who was named Best Young Player at the 2015 Copa America.

Speaking at his unveiling, Murillo said: "I feel like a warrior - my role is to give everything for this club that gave me a great opportunity. I will always work to the last drop of sweat for this shirt.

"Being part of this club is fantastic. As a child I had the opportunity to wear the shirt of Inter thanks to the Camp Inter projects.

"Inter have great history and tradition. I'm here to give my all and I'm glad to have this extraordinary opportunity.

"I gave up my holidays because once I knew my future the only thing I wanted was to get to the retreat to begin training with these colours. I am very happy to be here, I could not wait to start."

Murillo signed a four-year deal with Inter and could play his first game for the club against Bayern Munich in a pre-season friendly on Monday.