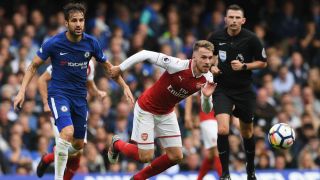 Aaron Ramsey was proud of the way Arsenal battled to a point against Chelsea in Sunday's Premier League clash.

Arsene Wenger's side created the better opportunities, with Alexandre Lacazette missing an open goal in the first half after Ramsey hit the post, but neither side could manage a breakthrough in the 0-0 draw.

The result ended a run of five consecutive away defeats to Chelsea for the Gunners in the top flight and was their first clean sheet at Stamford Bridge in 13 attempts.

Ramsey was pleased with the performance his side produced, especially in the wake of their last away match, in which they suffered a humbling 4-0 loss to Liverpool.

"I think we needed that against a top team," he told Sky Sports. "In recent years, we've struggled here, but we showed we're capable of competing against the best, we showed solidarity and that we can create chances against them.

"We needed that after Liverpool."

Ramsey was named man of the match for his display alongside Granit Xhaka at the heart of Arsenal's midfield, and he believes the partnership is growing stronger.

"I think we played higher up so if we did lose the ball we were able to get back into position quicker. Against Liverpool, that gap was a bit too big," he said.

"We showed we really wanted to get a result and we got one.

"I think me and Granit have played a lot of games now and we have a good understanding. We had one bad half against Liverpool but I've felt we've done well in the rest of the games.

"We've dropped a few points already so it was important to come here and get a result."