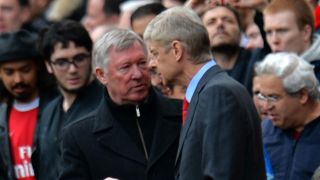 Arsene Wenger never contemplated a sensational switch to Manchester United from Arsenal due to his love of the Gunners' "values".

Former Red Devils chairman Martin Edwards wrote in his new autobiography that United sounded out the Frenchman – who has been in charge at Arsenal for two decades – about replacing legendary boss Alex Ferguson when the Scot announced he was to retire at the end of the 2001-2002 season.

As it transpired, Ferguson reneged on his original decision and signed a new deal at Old Trafford leaving Wenger, who has been the target of several high-profile approaches during his time in England, in the Arsenal hotseat.

The Frenchman concedes that United would have been an attractive proposition, but insists there was no temptation to make the swap.

"You should ask him," Wenger responded to reporters about Edwards' claims following Arsenal's 3-0 Premier League win over Bournemouth.

"I am always very confidential. One day maybe I will get all the contacts I had during my stay at Arsenal and it would make a few chapters. You should ask Martin Edwards."

Pressed on what made him stay at Arsenal, Wenger said: "Because I love the values of this club and, for me, a club is about values first.

"One day it would be a good chat to have with the press to look at the evolution. You speak about Manchester United, and the evolution in the last 20 years would be very interesting.

"A lot has changed but when I came here this club was about values that I love in sport. That is why I am still in the competition.

"So I always question myself. Yes, of course, Manchester United is attractive but am I happy here? The answer was yes.