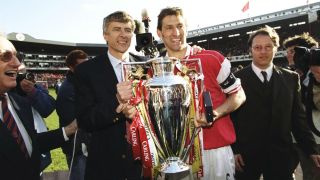 Former Arsenal captain Tony Adams claims he learnt nothing under Arsene Wenger as the Gunners boss looks to turn around a poor start to the season.

Arsenal were beaten 4-0 at Liverpool before the international break, then losing Alex Oxlade-Chamberlain to the Reds, and discontent appears to be growing again at Emirates Stadium.

Wenger signed a new contract in the close-season but Adams - who was at Arsenal when the Frenchman arrived in 1996 and won the Premier League two years later - has suggested the 67-year-old has little to offer when it comes to improving players.

"For preparation and recovery he was better than anyone," Adams told the Islington Gazette. "As a psychologist - regarding his interaction with his group of players - he was fantastic, second to none.

Ex-Arsenal stars - including Ian Wright - have also been critical of midfielder Mesut Ozil, causing Wenger to respond that those same players had their own flaws.

"I always had problems to understand what is a legend and what is not a legend," he told a pre-match news conference ahead of facing Bournemouth. "All the players we speak about today had their weak behaviours as well. Nobody was perfect.

"We have to take a distance with that as well and focus on our performance. We have to not be caught in animosity and we are grateful for what the players have done for the club.

"What matters is always the players on the pitch who can defend the pride of the club."