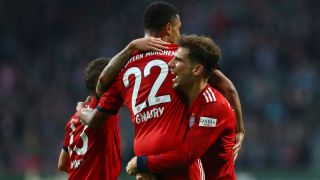 Serge Gnabry scored twice against his former club as Bayern Munich returned to winning ways in the Bundesliga with a 2-1 victory at 10-man Werder Bremen on Saturday.

The faltering champions had failed to register a league victory in November but duly welcomed the opportunity to face Bremen, a side they have dominated in the recent past.

Gnabry broke the deadlock with a volleyed finish and while Yuya Osako's header drew the hosts level, the former struck again in fortunate circumstances to give Bayern a 16th straight Bundesliga victory over their opponents.

Bremen pressed late on for a second equaliser before the dismissal of Niklas Moisander in stoppage time, the defender picking up a second yellow card for a blatant body-check on Robert Lewandowski.

The result, coming after they secured a place in the Champions League knockout stages on Tuesday, completed a good week for under-pressure boss Niko Kovac, who received backing from his bosses prior to the trip to the Weser-Stadion.

The visitors had already gone close through Lewandowski and Joshua Kimmich before Gnabry broke the deadlock in the 20th minute, converting at the second attempt after Jiri Pavlenka had blocked his initial volley.

Thomas Muller missed a glorious chance to double the lead soon after, failing to get enough on a header from a David Alaba cross, and Bremen made them pay with an equaliser 12 minutes before the break.

Manuel Neuer decided to come off his line to deal with Max Kruse's inswinging cross from Werder's left but failed to reach the ball before Osako, who nodded in his third league goal of the season.

Bayern suffered a further setback before half-time when Franck Ribery had to be substituted, meaning the fit-again Kingsley Coman - who has made a rapid recovery from an ankle injury suffered in his side's league opener against Hoffenheim back in August - was pressed into action.

However, Gnabry put his team back ahead five minutes into the second period, inadvertently providing the final touch off his left leg after a sliding Moisander had deflected Muller's low cross onto the winger.

The hard-fought result lifts Bayern up to third in the table but they remain nine points behind leaders Borussia Dortmund, who won 2-0 at home to Freiburg.

What does it mean?  Kovac breathes a little easier

CEO Karl-Heinz Rummenigge and sporting director Hasan Salihamidzic both offered public backing for Kovac prior to the fixture, and three much-needed points on the road will further aid his cause after a tricky beginning to life at Bayern.

Injuries have hampered the Croatian - Arjen Robben was a late withdrawal from the squad after initially being named on the bench - but the return of both Coman and Thiago Alcantara, who came on as a second-half substitute, should be welcomed ahead of a crucial run of domestic fixtures before the mid-season break.

Gnabry returned to familiar surroundings to grab a crucial brace, and he will have not been bothered about the whistles from Bremen supporters when substituted in the 80th minute.

The wait for a Bundesliga clean sheet goes on for Bayern - it's now nine games since they last stopped their opponents from scoring. Neuer's performances for both club and country have come under scrutiny of late, and the experienced goalkeeper’s indecision allowed Bremen to draw level. They can ill-afford such lapses if they are to make up ground in the table.

Bayern have a week off before they are next in action - they host struggling Nurnberg in Munich on Saturday. Werder play a day earlier, Fortuna Dusseldorf the visitors for the Bundesliga's Friday fixture in round 14 of the campaign.