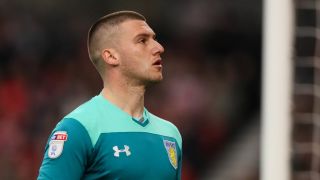 West Brom have announced the signing of goalkeeper Sam Johnstone from Manchester United in a deal reported to be worth £10million.

Johnstone has had numerous loans in the Championship, including spells at Aston Villa, Preston North End and Doncaster Rovers, but failed to make a Premier League appearance for United.

And the 25-year-old will now have a chance to continue building his reputation at West Brom, who are reported to have paid an initial £6.5m.

Johnstone has signed a four-year deal at The Hawthorns and is keen to get started at his new club.

"I'm happy to be here. I've spoken to a lot of people about the club and heard nothing but good things," Johnstone told the West Brom website.

"It's good to get through the door. I've played Championship games and won a promotion from League One with Preston but always seemed to end up back at Manchester United or going somewhere else.

"Now it's time to settle down and take my game up to the next level which I believe I can do here."

Head coach Darren Moore added: "Sam is young and determined to be the best keeper he can possibly be - he's hungry to do that with us at Albion.

"We've had him targeted from the outset and we're all delighted to have him on board. He buys into exactly what we are trying to achieve and will hopefully represent the shape of things to come."

Johnstone's arrival could hasten the departure of another ex-United goalkeeper, Ben Foster.

Former England international Foster has been linked with a switch to Watford, while United are reportedly ready to replace Johnstone with Stoke City goalkeeper Lee Grant.