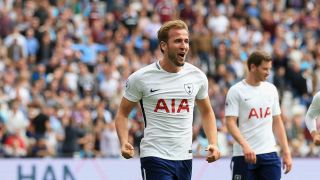 Harry Kane ruled the roost in another London derby for Tottenham as they survived a late West Ham rally to claim a 3-2 win on Saturday.

Though their Wembley woes have been well-documented, this performance at a stadium they could have called home was a reminder of Spurs' ruthlessness.

Kane's goals arrived inside four minutes of each other, with Christian Eriksen rewarded for a neat performance with a well-taken effort that makes him the Premier League's top-scoring Dane with 33 strikes.

Spurs were given a late scare as Javier Hernandez headed home and Serge Aurier, making his first Premier League start, was dismissed for two bookable offences, with Cheikhou Kouyate thumping home a header to make a third win of the season hard-earned for Spurs.

West Ham's first defeat in four keeps them on the brink of the bottom three, with Slaven Bilic left to lament his side's inability to capitalise on a dominant early period of the game.

Ten-man Spurs weathered a West Ham fight back to cling on to victory after a frantic second half at London StadiumSeptember 23, 2017

The hosts made early gains down the flank of Aurier, with the returning Marko Arnautovic denied a one-on-one by a superb recovery tackle from the Ivorian while also spurning two more promising openings on the left.

Kane's blushes were spared when he flicked wide from two yards, as the offside flag was raised, while West Ham were forced to shuffle the pack when a groin injury ended Michail Antonio's participation early and Andy Carroll came on.

Mark Noble and Moussa Sissoko were nose-to-nose as the latter reacted to a crunching tackle from the Hammers captain and the sudden lift in atmosphere seemed to switch Spurs into life as they went ahead.

West Ham were guilty of affording Christian Eriksen too much room, allowing him to pick out Dele Alli in the right channel, with an accurate cross giving Kane the chance to plant a header beyond the helpless Joe Hart.

That goal had come against the run of play, but Spurs were in complete control within four minutes as Hart saved Alli's close-range effort, only for the ball to magnetise towards Kane, who stroked home.

Spurs again had fortune on their side as they moved further ahead on the hour, Eriksen clipping home smartly after Kane's free-kick smashed off the post to Aurier, whose cross was deflected into the Dane's path.

Kane again hit the woodwork soon after, but the Hammers suddenly had life when Hernandez was allowed to roam the six-yard box unchecked and he headed home Jose Fonte's flick.

Aurier had picked up a booking just before that goal and six minutes later a shaky game was ended early when he needlessly chopped down Carroll in midfield.

Bilic was itching on the touchline as Winston Reid blazed over on an angle with team-mates well-placed centrally, with Carroll seeing frantic appeals for a penalty rejected after getting a shove from Davinson Sanchez as the Hammers hopes went up in smoke as a fractious contest ended in a pointless squabble between the players.