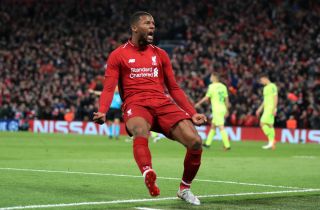 Liverpool midfielder Georginio Wijnaldum admits he never dreamt as a child of playing in a Champions League final.

The Holland international, unlike so many at a young age, did not grow up as a football-obsessed little boy.

Gymnastics was his preferred sport and, although he showed enough promise at football to join for Sparta Rotterdam’s academy at the age of six, it still did not spark his interest.

GINI! 🔥🔥@GWijnaldum's stunning semi-final double… and that celebration in front of the Kop. 😍 pic.twitter.com/lHoWH2PDWp— Liverpool FC (@LFC) May 30, 2019

The club gave their youngsters season tickets to watch the senior side but Wijnaldum passed them on to friends as he had no interest in watching.

Only when Sparta increased the number of weekly training sessions when Wijnaldum turned 10 did he finally realise it was something he should probably pay more attention to.

“I was interested in football but not like the younger kids who breathe football every day. I was interested in gymnastics,” the Dutchman, who admits he cannot remember which Champions League final was the first he watched properly and only recalls viewing highlights of Liverpool’s famous 2005 victory in Istanbul, told Press Association Sport.

“Yeah, that’s why I don’t know a lot of players! I didn’t even go to the games. When I was at Sparta Rotterdam, they gave us season tickets, but I always gave them away to my friends so they could go with their families.

“Even now, I don’t watch a lot of football. I was always a fan, but it wasn’t my number one priority.

So he had no dreams of playing in a Champions League final.

“No, I had a dream to play as high as possible, but Champions League football? I never really had that dream,” added the 28-year-old, who is about to play in his second successive final.

“Now you have even children watching the Champions League final, but I probably never even looked at them when I was a kid.

“The only thing I wanted was to be a professional footballer and to play in the World Cup.

Wijnaldum’s determination and talent eventually brought him to Liverpool via Feyenoord, PSV Eindhoven, Newcastle – and a World Cup semi-final against Argentina in 2014.

He has quickly become the go-to man when Jurgen Klopp has a selection problem. Having already played every midfield position and centre-back he was pressed into action as a false nine in the semi-final first leg in Barcelona.

The selection conundrum Klopp has against Tottenham is choosing four midfielders for three places.

His default trio in the Champions League has been Wijnaldujm, captain Jordan Henderson and James Milner but the recent form of Fabinho – who arguably had his best game for the club in the second leg comeback against Barcelona – means it is possible the trio will be broken up.

“The good side is if you can play everywhere, it’s easier for a manager to put you in the team. He knows you can help the side out,” Wijnaldum added.

“But at the other side if you have two good midfielders and only one position, a lot of times the manager will put the midfielder who can only play in midfield and use the other one in another position. There is good and bad.”