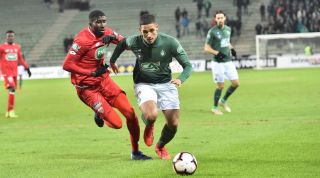 The 18-year-old has been strongly linked with Unai Emery’s side after enjoying an impressive breakthrough season, helping his tean to a fourth-place finish in Ligue 1.

Arsenal have sent scouts to watch the centre-back in action on several occasions as they look to strengthen their defence over the summer.

Saliba is rated at £25 million after signing a new four-year deal earlier in the 2018/19 campaign.

However, Football.London reports that the Premier League club have been told that St Etienne want Saliba to be sent back to them on loan next season as part of any transfer deal, terms which the Gunners are not willing to agree to.

With Manchester United and Manchester City also showing interest and potential willingness to meet the condition, Arsenal appear to be on the back foot in their hopes of signing the youngster.

Furthermore, Peuple-Vert reported that the player’s agent Djibril Niang was in Manchester over the weekend as speculation grows that United or City could close a deal.