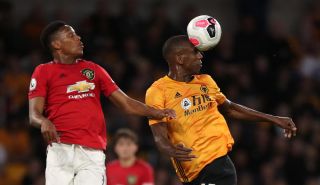 Wolves boss Nuno Espirito Santo has confirmed that Willy Boly is fit again and will be in the squad against Manchester United on Saturday.

The Frenchman has been out since October with a broken fibula but he is back to bolster Wanderers’ defensive options ahead of the trip to Old Trafford.

Boly’s return, together what that of Jota, who made his comeback from injury last week, gives Nuno a full compliment of players to choose from – with numbers also boosted by new signing Daniel Podence.

“Willy is an important player, but during his absence we have been able to find solutions, so having him back gives us one more solution for what we want for the future,” said Nuno.

“I was happy (in his absence). I think we performed well and due to the circumstances, I thought we performed really well.

“Now they are both ready and it is good to have them back both fit.”

Podence completed his move from Olympiakos this week, signing a four-and-a-half-year deal, and the 24-year-old attacking midfielder could make his debut at some stage against United.

“He can give us good options, he’s a solution,” said Nuno. “He fits in the profile that we think we should do in this transfer window; bring players that can help us and make us stronger as a team.

“He fits in to our idea of the game. Before we bring someone in we have to analyse and look to see whether they fit. If it’s a good fit and it is possible, you bring.”

Wolves have already played United twice in 2020 – drawing 0-0 at Molineux before a replay defeat in the FA Cup – and Nuno is expecting another difficult test.

“It will be tough, it’s a tough game,” said the Portuguese. “Going to Old Trafford is always tough and we are going to face a very good opponent. But we are ready and know we will need to compete well.

“Like always in all of the games, the idea is the same. We perform well and we go from there to try and improve, try to rectify the mistakes that we made, try to be more clinical in some moments.

“But we have to compete, we have to play good, because we are going to be playing a good team.”