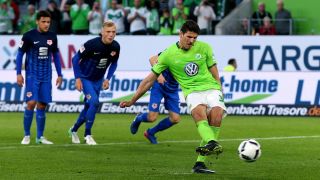 Mario Gomez scored the only goal from the penalty spot as Wolfsburg took control of their Bundesliga relegation play-off against Eintracht Braunschweig with a 1-0 win on Thursday.

Luiz Gustavo almost opened the scoring in the second minute before Mirko Boland should have given Braunschweig the lead, somehow heading wide from six yards out after terrific play on the right wing by Christoffer Nyman.

Wolfsburg were awarded a penalty in controversial circumstances after 33 minutes, referee Sascha Stegemann giving the spot-kick for a handball on the edge of the box by Gustav Valsvik.

Gomez appeared to have handled the ball in the build-up but the striker stepped up to convert the penalty, sending goalkeeper Jasmin Fejzic the wrong way from 12 yards.

Daniel Didavi had a chance to double Wolfsburg's lead early in the second half but he hit the side-netting with his shot after rounding Fejzic, who later made a great save low to his right to keep out a deflected Gomez header.

Braunschweig coach Torsten Lieberknecht remonstrated angrily with Stegemann at the full-time whistle but his side will have the benefit of home advantage in Monday's second leg.