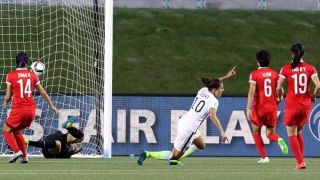 United States continued their dominant run at the Women's World Cup, downing China 1-0 in the quarter-finals.

Carli Lloyd - in her 200th appearance for the USA - got on the end of Julie Johnston's lofted ball through in the 51st minute, the number 10 out-leaping China's Zhao Rong to glance a header past goalkeeper Wang Fei.

It was all Jillian Ellis' side required to continue their brilliant run at the showpiece, where they have conceded just one goal in five matches.

The performance in Ottawa was more meritorious for the Americans given the absence of midfielders Lauren Holiday and Megan Rapinoe, who were serving one-game bans due to yellow card infringements.

Some poise from the spot saw Germany progress to the semi-finals past France, after full- and extra-time finished 1-1.

Louisa Necib's 64th-minute opener in Montreal had looked to have given France passage to the last four, before referee Carol Anne Chenard pointed to the spot after Amel Majri was adjudged to have handled the ball in the area.

Celia Sasic made no mistake with the penalty in the 84th minute, and the German striker was also key in the shoot-out.

Sasic buried her penalty to make it 5-4, making it nine straight goals from the outset - before German goalkeeper Nadine Angerer saved the first sudden-death kick of the phase, denying France substitute Claire Lavogez.