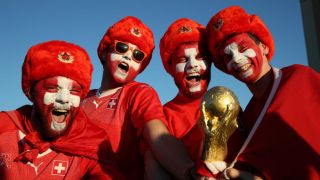 The group stage came to a close in Nizhny Novgorod in - perhaps surprisingly - thrilling fashion between Switzerland and Costa Rica.

Plenty of excitable travelling fans, and those from more local climes, descended on the banks of the Volga to watch an action-packed 2-2 draw.

Away from the pitch, which is now recovering for the knockout phase, Omnisport experienced a behind-the-scenes tour of a Soviet football exhibition, sampled some region-specific merchandise and even watched a polar bear greeting supporters. Well, sort of.

Here are some of the highlights from week two in Nizhny.