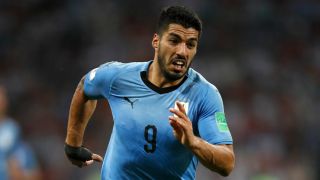 Just eight teams remain at the World Cup, and few would have predicted that so many big names would be missing from the quarter-finals in Russia.

The round of 16 saw Spain, Argentina, Colombia and Mexico eliminated, joining the likes of Germany, who fell at the group stage, and Italy, who failed to reach the finals at all.

Among those still standing, Brazil and France represent the early favourites while Sweden and Russia have advanced further than many would have expected, and all will be eyeing a run to the final after the unpredictable way this tournament has unfolded.

With just over a week of the World Cup to go, we weigh up the chances of the quarter-finalists heading into a mouth-watering round of matches.

As a resident of Paris, Uruguay striker Edinson Cavani would have relished the opportunity to take on France at the World Cup. Sadly, the 31-year-old Paris Saint-Germain target man is unlikely to start the game due to a calf injury, and Didier Deschamps' side will be relieved if he is unable to make the XI. Cavani scored twice as Uruguay beat Portugal 2-1 in the round of 16, while Group C winners France were inspired by two-goal teenage sensation Kylian Mbappe in their 4-3 win over Argentina. Uruguay are likely to field Girona forward Cristhian Stuani in place of Cavani, while Deschamps will look to Corentin Tolisso to fill in for the suspended Blaise Matuidi in his front four.

With Cavani's fitness in doubt, Uruguay will be increasingly reliant upon Suarez to take advantage of any gaps in the France defence and snap up every opportunity for a shot at goal. The Barcelona striker has faced Real Madrid defender Varane in high-stakes matches at club level and the atmosphere in Nizhny Novgorod promises to be every bit as intense as El Clasico.

Top stat: Oscar Tabarez's men have won their opening four games in Russia, becoming the first Uruguay side to do so at a World Cup tournament since 1930 - and the fourth game in that run was a 4-2 victory over Argentina in the final.

The boys had a spring in their step in training as preparations intensified ahead of Friday's quarter-final with July 3, 2018

Tournament favourites Brazil have yet to really fire on all cylinders at the World Cup as they prepare to face a Belgium side that has plundered 12 goals in four games. Roberto Martinez's men looked increasingly likely to live up to their billing as Belgium's golden generation until Japan gave them a scare in their 3-2 last-16 victory, while the most discussed aspect of the Selecao's 2-0 win over Mexico was Neymar's theatrics rather than his football. Both these sides have a point to prove in Samara.

While Neymar will likely hog the limelight, this game may well hinge on the battle for possession and space in central midfield. Belgium are at their best when De Bruyne finds room to manoeuvre and, with Casemiro suspended, it may be down to his Manchester City team-mate Fernandinho to shackle him.

Top stat:  Brazil have faced fewer shots on target than any other team, with just five efforts testing Alisson. They have also had the most shots on target, making 48 accurate attempts.

Sweden have been one of the World Cup's surprise packages, stepping out from the era in which Zlatan Ibrahimovic was the team's talismanic focal point to find strength in unity under Janne Andersson. Perhaps the toughest challenge facing England is breaking down a miserly defence that has kept three clean sheets out of four games so far, but Harry Kane and Co. have never looked more confident than they do now.

Much of England's best play in their last-16 penalty shoot-out win over Colombia came down the right wing and if Werder Bremen full-back Augustinsson fails to track Trippier's runs, Kane will receive the service he thrives upon.

Top stat: Sweden's victories over Mexico and Switzerland were their first back-to-back wins since 1958, when they reached the final on home turf.

The World Cup hosts have had their wings clipped since they opened the tournament with a 5-0 thrashing of Saudi Arabia, but Russia proved their ability to grind out results when they knocked out Spain on penalties after a 1-1 extra-time draw in the last round. Having narrowly scraped past Denmark in similar fashion, Croatia know the perils of playing well organised, defensive teams, but if their talented midfielders hit form they should – should - have too much quality for Russia.

Real Madrid star Modric is more than just Croatia's playmaker; he is their captain and their inspiration. If Spartak Moscow midfielder Zobnin can keep him as quiet as he kept Andres Iniesta when Russia defeated Spain, the hosts might pull off another shock result.