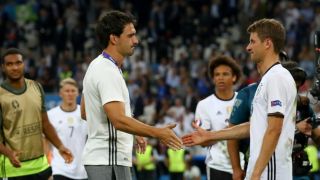 Mats Hummels says Germany's exit from Euro 2016 is not any easier to take because of their World Cup victory two years ago.

The Bayern Munich defender, 27, was suspended for the world champions' 2-0 defeat to France in Marseille, which came after Antoine Griezmann netted in either half.

Hummels rued Germany's defeat as their 20-year wait for a continental crown was extended and added that winning the world's biggest event in 2014 did not ease the pain this time around.

"To be honest, no," he told reporters. "Just because you won another tournament does not mean you lose you hunger to win another one and that is a good sign.

"You still want success and it means we will kick each other to improve further. I was really mad at first. The atmosphere after the final whistle was s***, down and very disappointed.

"Now there remains only one more chance for me to win a Euro. I don't think I will be around when I am 35. This is so disappointing.

"In the end there is nothing [positive to take from Euro 2016]. When I go to a tournament, I want to win it and the bottom line is it was no success.

"Still, we know that we belong to the best teams in the world with our style of play. This hopefully won't change over the next few years. But it's not something that helps at the moment."

He continued: "It is always easier to accept defeat when you were the weaker team. If you had it in your own hands it hurts even more.

"I would say we missed Mario Gomez most. We did not do a bad job defensively, you always concede a few chances - you can't prevent that, but we were lacking someone who scored.

"If we won the match, nobody would complain, everybody would have said, 'Deserved win for Germany'. The quarter-final two years ago was more balanced than this match.

"Back then we scored and France did not. Often small things decide and this time they did not go our way.

"We do not need to worry about having quality players. We will lose only few players due to age over the next years. There were only a few in our team in their 30s and Manuel Neuer can play until he is 55, no problem!"