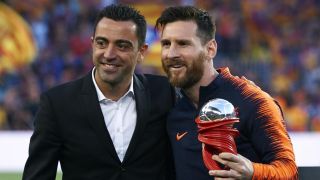 Spain's World Cup campaign was thrown into chaos when Lopetegui was fired on the eve of the tournament after agreeing a deal to become Real Madrid's new coach.

Fernando Hierro stepped in to take the reins during the World Cup, but he left that post and resigned as director of football following the penalty shoot-out defeat to hosts Russia in the last 16.

Rubiales is expected to put Luis Enrique forward as his selection to succeed Lopetegui in a board meeting on Monday.

But Xavi has no problem with not being in consideration, as he is convinced he simply not prepared for such a position.

"First of all, I do not see myself [as being] ready," Xavi told AS. "Secondly, I do not have the qualifications and third, it is not the moment.

"I do not see myself [coaching the national team] yet, I have to learn. I have to prepare myself well, train my staff, there are many things to do. It'd make no sense. Let my name come out if one likes, but it is totally premature."

Xavi also backed Rubiales' choice to fire Lopetegui, appearing baffled as to the coach's decision to reveal his plans so close to the World Cup.

He said: "Why would you announce it before the World Cup? Regardless of whether it is Real Madrid or another team.

"Wait. You are committed to the cause and you demand the players to be. You must set an example in that. I do not get it.

"Rubiales acted well, the Federation must be above the people. I will not hide that I have a good relationship with Rubiales, but if he had been wrong I would also say so, but in this sense I think he acted well."