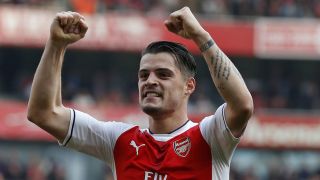 Granit Xhaka has no plans to tone down his combative style of play despite his growing collection of cards.

The Arsenal midfielder has been booked 11 times in club colours this season, with red cards coming his way against Swansea City and Burnley.

But the Switzerland international, who opened the scoring in Sunday's 2-0 Premier League win over Manchester United, is happy with his approach to the game.

"In football you get criticised if you are sent off," said the pre-season signing from Borussia Monchengladbach.

"It's my style of play and nobody can make me change that. Even if I get another red card, then that happens. You become cleverer, maybe look more and since my red card, I think things have improved.

"It's not like I played my first football match in England. For me football is pretty much the same everywhere, the ball is round, but maybe tactically things are different than at other clubs I've played for."

The weekend victory at Emirates Stadium – Arsene Wenger's first top-flight success against Jose Mourinho – saw the Gunners close to within six points of fourth-placed Manchester City, over whom they have a game in hand.

Xhaka was content with the display and retains hope of claiming a Champions League spot as the 24-year-old seeks to hone is own talent.

"I think in general it was a good performance from us," he said.

"When everything comes together like that, you look good on a personal level too. I'm really satisfied with my performance and the performance of the team, which is most important.

"I didn't sign here for five years [to not improve as a player]. This is a top club, a great club.

"We're having a season where things have been a bit more difficult, but I'm convinced that in the coming years we can show another side.

"We always have hope [of finishing in the top four] – hope dies last. It's up to us, we need some luck along the way, but if we win the next four games, I'm convinced that we can do it."