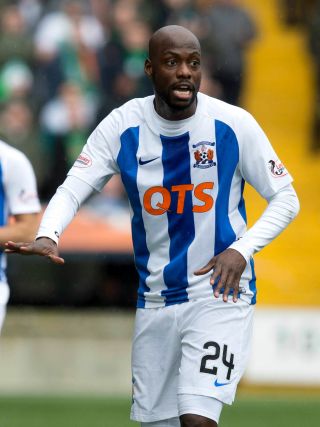 Youssouf Mulumbu admits he feels like one of the Kilmarnock family again after signing on for his third spell at Rugby Park.

The Democratic Republic of Congo international was a fans’ favourite during his previous two stints in Ayrshire and has now been lured back on an initial six-month deal after answering a mayday call from boss Alex Dyer.

With Irishman Alan Power ruled out for several weeks due to a hamstring injury and Killie sitting second bottom of the table with just two points from their first five games, Dyer admits he needs someone with quality and character to help his side out of their slump.

Now he hopes Mulumbu can rediscover the form which made him a key figure as the team – then managed by Steve Clarke – achieved back-to-back top-six finishes in 2018 and 2019.

Former West Brom ace Mulumbu has not played for over a year since his last stint with Kilmarnock, on loan from Celtic, ended but having spent the last week training with Dyer’s side the 33-year-old will go straight into the squad to face Dundee United on Saturday.

And Mulumbu told the club’s website: “For me nothing changes, it is family. I came back to training and I knew all the lads in the dressing room so it has been easy to adapt myself.

“I need to get my fitness back and that’s what I’m trying to do.

“Once I get on the pitch I’ll be ready to get going and help the team.

Meanwhile, Killie striker Nicke Kabamba admits it did not take long for the credit he deposited in the bank with his man-of-the-match display against Celtic to run out.

The big frontman proved a real handful for Christopher Jullien and Kristoffer Ajer as he inspired Dyer’s team to a deserved point earlier this month.

Kabamba won his side the penalty which Chris Burke converted to seal a 1-1 draw and generally refused to give the champions’ back line a moment’s peace.

But the former Portsmouth and Hartlepool hitman found himself back on the bench three games later as Killie lost to Rangers last weekend.

Being dropped for the trip to Ibrox was a bitter blow to the 27-year-old but Kabamba hopes he has now paid his dues on the sidelines and wants the chance to shoot down United when they visit Rugby Park.

“It was a change of personnel last week at Ibrox,” he explained after being asked why he missed out on starting against Steven Gerrard’s side. “I was a little bit disappointed not to be involved from the start but that’s football.

“I just need to make sure I continue to do well in training and make sure I’m involved in the next game.

“The game against Celtic was a massive confidence-booster for me. I played well but didn’t score so the next game I play in I’ll be looking to play well and get a goal.

“But I suppose that shows you about the standards expected here. Just because I did well against Celtic doesn’t mean I will keep my place a couple of games down the line.

“We just need to keep those standards as high as possible.

“Everyone wants to play, so it was a bit frustrating.”