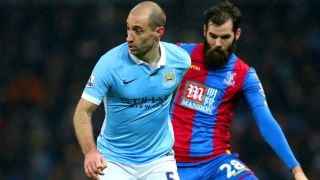 Manchester City full-back Pablo Zabaleta has declared himself "half Mancunian, half Argentinian" after making his 200th Premier League appearance for the club.

Zabaleta celebrated his 31st birthday in fine style as City sealed a 4-0 home win over Crystal Palace on Saturday.

The Argentina international has been at City since 2008, winning two Premier League titles, an FA Cup, a League Cup and a Community Shield.

The milestone means he joins compatriots Carlos Tevez and Fabricio Coloccini to play over 200 league games in England.

And the 31-year-old said he was proud to reach the landmark.

"It was a good gift to get three points," Zabaleta told the Manchester Evening News. "It was a special day, my birthday and my 200th Premier League appearance for this club.

"It's a great landmark and I am very proud.

"Maybe I am half Argentinian and half Mancunian after a long time here, but I think Carlos and Coloccini are the only other Argentinians to play that many games in one of the greatest leagues in the world."

Zabaleta said he has become accustomed to the freezing conditions in his adopted home in North-West England.

"One of my best friends came from Argentina yesterday and he couldn't believe how cold it was. I told him 'Don't cry, I've been here for eight years," he said.

"It's normal for me – I had an ordinary jacket on and he was wearing three! You get used to it, and today was one of the coldest days of the season."