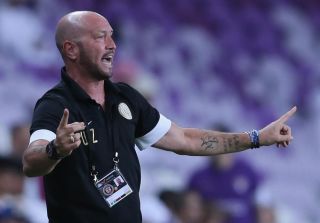 Serbia have been searching for a new coach since November after Sinisa Mihajlovic left his post to take charge of Serie A side Sampdoria, with the national team already out of contention to qualify for the FIFA World Cup.

Ljubinko Drulovic was appointed on a caretaker basis but Serbia appear to be closing in on their man in the form of Italian coach Zenga, who guided Serbian powerhouse Red Star Belgrade to the league-and-cup double during his only season in charge in 2005-06.

Speaking to Romanian broadcaster Dolce Sport, the 54-year-old, who has been out of work since departing UAE outfit Al Jazira in May, confirmed talks have taken place with the 30th ranked nation.

"There are discussions with the Serbian Federation. A major nation, one that I am very attached to it is Serbia," said Zenga.

"To have the opportunity to coach the national team of Serbia would be an incredible advantage."

Zenga also said he had other offers on the table: "We must always weigh things right. I'm in talks with clubs all over the world, from Turkey to UAE."

Serbia, who will play France in an international friendly in September, have been drawn alongside Portugal, Denmark, Albania and Armenia in Group I for UEFA Euro 2016 qualifying.