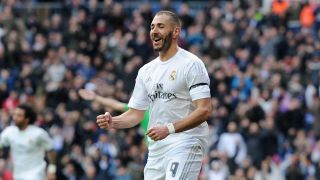 Real Madrid coach Zinedine Zidane believes the French Football Federation (FFF) would be making a big mistake by allowing Karim Benzema's ban from international football to move into the European Championships in June.

Benzema was suspended from representing France at any level by the FFF until the legal investigation into his involvement in an alleged plot to blackmail international team-mate Mathieu Valbuena has been concluded.

France is the host of Euro 2016 and Zidane believes his country will be severely hurting its chance of a home triumph by not selecting Benzema.

"When we look at his numbers and everything he does on the field, we cannot let a play of this level go."

Benzema has made no attempts to have his FFF-imposed ban lifted, taking to Twitter last month to make public his acceptance of the ban, although he denies any involvement in a criminal conspiracy against Valbuena.

The Madrid star scored in his side's 5-1 rout of Sporting Gijon on Sunday, before being substituted with an injury.

The Frenchman said the injury was not serious and hoped to be back playing for his new coach Zidane, who he was full of praise for on Sunday, sooner rather than later.

"Zidane's a great coach, he knows everything about football," Benzema told AS.