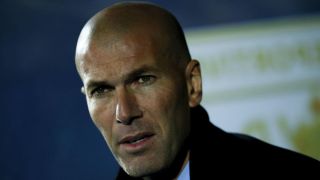 Zinedine Zidane bullishly rejected the notion of walking away from Real Madrid as he dismissed suggestions of a rift between himself and the Santiago Bernabeu board on transfer policy.

Madrid entertain Deportivo at the Bernabeu on Sunday, aiming to bounce back from last weekend's 1-0 loss to Villarreal that left them fourth in the table – 19 points behind bitter rivals Barcelona at the summit.

Zidane suggested Marco Asensio's late goal to beat Leganes 1-0 in the Copa del Rey during midweek could stand as a turning point and told a pre-match news conference for Sunday's match against Depor that he was not considering the end of his tenure with the reigning Spanish and European champions.

"I'm never going to throw in the towel. Everything can happen here but I'm going to keep going, fighting - as I've always been shown to do.

"I'm never going to give up. Those are the values of this club and the people who work here at this club."

Sergio Ramos will return to full training next week following a calf injury, although Jesus Vallejo's hamstring problem leaves Madrid short at the back.

Zidane maintained this would not force him into the January transfer market and insists his employers support this stance.

"No, there aren't different opinions. I don't think so," he said in a particularly terse exchange with a reporter. "You're asking and I'm replying, so it's clear for you.

"You have to ask someone else [for a different answer]. If you're asking me, I don't think there is a difference of opinion between the club and me as a coach."

Villarreal became the third visiting team to win at the Bernabeu this season and Zidane was asked whether Madrid's famed arena had lost an element of its fear factor.

"I'm not worried about that," he replied. "We need to think about us, as ever.

"We're a team, we're united and the solution is within the squad. Whatever people think, that they can come to the Bernabeu and get points… we have to show who we are. Tomorrow we have a chance to show that."